Once there was this girl, her name was Lilac. She lived on a beautiful planet called Metanoia. The most wonderful and strangest plants grow on this planet. It was covered with carpets full of wildflowers. Blue, yellow, red, purple – a true festival of colours. There were stunning mountains with mountain peaks so high, that they were hidden behind clouds in the shape of sheep. Sometimes, when the sun wiped the clouds away and the people of Metanoia could see the peaks, they feel a deep devotion to nature only through the presence of the mountains. Splendid bubbling turquoise rivers flowed through the flower meadows. A magical place.

Lilac lived a happy life, but she was quite alone. There were other people on the planet, but they were all immersed in grey. An old grumpy demon from one of the other planets didn’t like the beauty of the world and happy people planets. When he woke up one morning and had a really bad day, he cursed the whole Metanoia planet. The beauty still exists, but the people can’t see it anymore; except Lilac. She was lying between the flowers when the curse happened, caught by her own day dreams. That saved her. A few years went by and she arranged herself with the situation. She planted her own vegetables and tried to talk to the grey people once in a while, even when they didn’t understand her.

The old demon forgot about the planet. He was very moody and spread his hatred on other planets. But when one of his spies told him that there was still happiness on that planet, he was blind with rage and sent one of his servants, the most devilish of all, to the girl.

The other night Lilac woke up and trembled. Her room became freezing cold. Then, despite the darkness, she saw the demon. It was cruel to look at him. He nourished himself by the sadness of other people. His face was emaciated. His fingers were nothing but bones. The second she looked at him in shock feels like an eternity. Then he reached inside her and tied a knot in her soul. Waves of pain rushed through her body and took away her breath. The demon disappeared as fast as he came. Only the freezing temperatures remained.

The pain, the sadness and the darkness she felt were almost unbearable. Little did she know that the three would be her daily companions for a while. They tied her to the bed, they robbed her energy and her joy. She became very ill. Days became years. Her will to live grew weaker.

One day when she was lying in bed and looked out of her window, she could see the mountain peak. She took all her strength and the rest of her energy, stood up and went for a walk. She saw the beautiful world, but couldn’t feel happiness. Every step was torture. The knot in her soul was too strong.

She was exhausted and leaned against a tree. She could hear the wind in the leaves. It was like an old, forgotten memory, which flowed through her mind. She already forgot how much she loved the wind. Her restless eyes looked around and suddenly something shimmering behind a bush caught her attention. What could it be? Out of curiosity she stood up, walked over and found an old mirror with a beautiful, curved old golden frame. The mirror itself was dusty. She tried to look into it and rubbed over it, but the dust remained. She wondered about this strange item, put it in her pocket and went her way home. 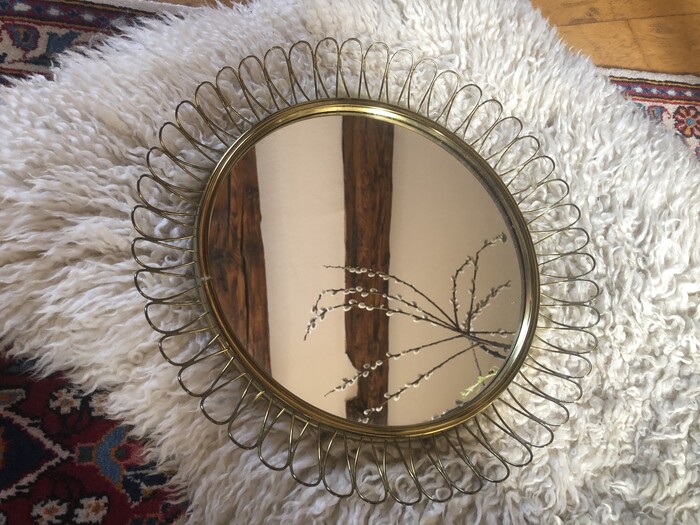 When she was at home in her bed again she tried to look into the mirror again, but she couldn’t see herself and out of no reason, she couldn’t even explain it to herself, she began to speak. Lilac poured all her dark thoughts and emotions into the mirror…and suddenly she got an answer. A male voice said "Hello". She was so frightened that she almost dropped the mirror.

She took all her courage and started a conversation with the stranger in the mirror "What’s your name?", she asked with a trembling voice. "Enigma", he answered. What a weird name she thought, "Where do you live?". "I live in the universe and the universe is within", he replied. It seemed that he preferred to speak enigmatically, no wonder why he had such a name.

They kept talking every day. He told her about the universe and that there are more things in life that she could ever imagine. He told her about wonderful things and that she should trust and believe in herself, that everything comes from within. They became friends. She felt less alone and had finally someone who understands her. His words had a magical effect and wrapped around the knot in her soul. The pain became more bearable and she began to feel hope again, she began to feel the beauty around her and her energy level increased.

Her thoughts still poured uncontrolled into the mirror, she couldn’t stop them. And she still wondered why the mirror was still dusty and she couldn’t see herself. The thoughts began to steal Enigmas time. More and more. They took his energy, the energy he needed so badly to do good. She didn’t understand that she became a time thief. The thing with stolen time is, once it is stolen, you can’t give it back. The more time she stole from him, the more he withdrew from her. She lied to him to keep him in her life, afraid of being alone again, but the lack of honesty made it even worse. The knot in her soul became stronger again, made it hard for her to breathe.

One day she woke up by a quake, caused by the mirror. She tried to reach to the mirror to scream for help, but didn’t get an answer. The quake brought all her lies and all her old beliefs to collapse. She stumbled and the mirror fell to the floor and broke into a thousand pieces. The quake stopped. She knelt next to the broken pieces and started crying.

She didn't know how many days have already passed, but then she stood up, put the pieces of the mirror in her side-table and sat down and started to look within. She meditated for hours, days and weeks. The darkness, which tried to envelop her again, disappeared. She learned how to control her thoughts and emotions. And she began to see the universe. The place Enigma told her about. She wanted to see more and looked within and what she saw made her love herself again. Then the knot in her soul began to loosen. She began to glow as she was full of light. She gave her light to the grey people and everyone became happy and colourful again.

One day she remembered the mirror in her side-table next to her bed and began to fix it. It took her years as some of the pieces were tiny. Some of the people came by to visit her, they just shook their head, said she should give up and to let go, but she didn’t listen to them.

And then someday she managed it. She put the last piece into the mirror. She took a deep breath and looked into it the mirror. The dust was gone and she could see her true self.

…and suddenly she got an answer.

Our one-click login makes it easy to share your thoughts. You can ask your own questions, get email notification of replies to your posts, add your comments, and give a thumb-up to the things you like.

It's a nice story with well thought out characters along with a smooth flow.

I am not sure whether you wrote this based on personal experience or from imagination, nonetheless it shows that too much reliance on someone does not just affect the one person who is trying to help but also the other person receiving help. The way I see it is although the person getting help is able to forget their worries and deal in a much better way with what life is throwing at them and become a bit more happy, they still are very much dependent on the other person and do not improve themselves as a result. So if the helper goes away, the "helpee" goes back to square one (or zero) and run into depression.

Pain is inevitable but suffering is optional

When you have injured yourself and can feel the physical pain within your body, there's not much you can do about it but if you suffer as a consequence, for example, worrying how long it's going to take you to get healed because you can't wait to go back to doing your exercise, which is making you unhappy, then this suffering is own your choice and you are inevitably bringing this sadness to yourself.

Life is undeniably difficult but you have to accept reality as it is and not make it into something it isn't (something you wish it to be), in order to move on and be happy. At least this is what I think.

Thank you for your nice answer. The story is based on my imagination. I never found a magical mirror. Even though magical places like the one in the story really exist.

With the story I want to spread awareness for mental health issues and to show that it is okay to seek for help and accept it, when you're really down. Sometimes people wait too long until they can say the important sentence 'Hey, I need help.' It would be nice if we were all more aware of who we are talking to and look a bit behind a smile and a 'I am good'. It could save beautiful souls.

You have to understand that the words of the person in the mirror were like "first aid". Without the help, who knows what could have happened. In the situation Lilac is in, the only person who can save her is herself. That's what she did in the end, without any additional help. Nevertheless the conversations with the stranger helped her in the healing process. She healed herself first, before she fixed the mirror. Why she fixed the mirror? I have to admit that the part is not good written, the story was already lengthy. The answer is simple. They became friends. Nothing more or less. Aren't friendships something beautiful?

Since I am the author of the story I can tell you in reliance that Lilac is a very strong person. I am pretty sure she will find her way, move on, without depending on someone.

You are right that suffering is self caused. You always have a choice. A good start to begin with is to be honest with yourself and with others.
But don't be too hard to yourself, as it is something you can learn along the way :)

1 replies
62 views
6 Simple Ways To Be More Sustainable – regrowing, grow your own sprouts, make your own nutmilk/oatmilk, nice cream

0 replies
113 views
2. The Wander Notebook – The Art of Being Disciplined and Increasing Your Willpower

0 replies
58 views
3. The Wander Notebook - Dealing with death and loss of a young loved person and friend / how the awareness of death and being mortal give our lifes another meaning

0 replies
45 views
Why people don’t try to be more spiritual, if it is possible for everyone? Why are so many people live in an autopilot zombie mode?